Most phones have very good audio output quality via their analog headphone jack <note to self: resist urge to crack iPhone 7 joke…> if you can find earbuds that sound good. Yet that’s a big if. Most earbuds sound like crap. Of the few that sound good, some have impedance or efficiency that don’t match well to a phone. Also, while phone audio output is often very good, that does not mean excellent or reference quality, so don’t go overboard and waste money on really expensive IEMs.

I listen to mostly natural acoustic music and I’m picky about sound. The best really good IEM I’ve found is the Vsonic GR07. They cost about $100 and sound really good. To my ears, they’re comparable to a pair of full-size HD-600. They have flat, neutral response that is neither warm nor bright, but just right. The treble is smooth with good detail. Due to a phone’s audio output limitations, even with uncompressed FLAC files the extreme high frequencies are rolled off and there’s less “air”, slightly less crisp transient response.  It sounds very good, even great, but not excellent or reference quality. The GR07 is about the best quality it’s worth paying for given the limitations of the source.

The best cheap IEM I’ve found is the Vsonic VSD1S. They cost about $35, have the same high quality construction and 90% as good sound as the GR07. Comparatively, the VSD1S has a slight midrange recess, not quite as smooth or extended treble. Overall, they still have a nice neutral sound despite have a touch more “V” shaped response curve. They’re good enough to listen to for hours enjoyably without fatigue, better than most other good IEMs, but just not quite as refined as the GR-07.

Mountain flying in small single engine airplanes adds potential risks. But there are things pilots can do to minimize these risks and do it safely.

Night: don’t do it. Night adds risk, mountains add risk. Either alone can be safe if you take precautions. But don’t combine them.

Fuel: use a bigger fuel reserve because there is greater chance to be delayed – either having to take an alternate route, or due to strong wind. But don’t simply top off the tanks if you don’t need to because that can add unnecessary weight, impairing performance. Flying in mountains at high DA, you need all the performance you can get. Normally, I plan to land with at least 1 hour of fuel in the tanks. When flying in mountains I increase this to 90 minutes.

Water: you’ll be at high altitude which is dehydrating. Bring plenty of water for everyone on board.

Wind: understand how wind flows around mountains and plan accordingly. Here’s a great picture I got by Googling: 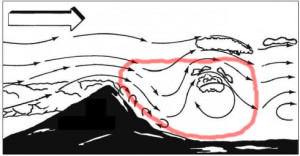 To summarize, if you’re flying over mountains here are ways to minimize the risk:

That’s it. Connect the Juli@ unbalanced analog outputs to the amp’s inputs. Play your CDs, DVDs, whatever on the computer. Use whatever headphones you want.

Total cost: $510 = $170 for the card, $340 for the amp. Plus the headphones. You can get some vintage Sennheiser HD-580 or HD-600 on eBay for a couple hundred bucks. Or you can go all-in with a really nice set of headphones like the Audeze LCD. The Corda Jazz has a smooth sound, detailed and sweet yet neutral, with enough power to  drive almost any headphone on the planet.

I use this as a secondary system to drive my Audeze LCD-2F when my reference system is unavailable. It is amazing – 95% as good as the reference system. Extreme treble and large ensemble complex music is not quite as refined, but that’s just picking nits because it sounds damn good.

Years ago when I was in college I would have climbed a mountain of broken glass for sound like this, especially at this price.

Note: you can get an audio system like this even cheaper from JDS Labs. Get a single DAC+Amp for $300, so you don’t need the sound card. Just stream the bits from the USB port of any computer into the DAC. JDS Labs is the American version of Jan Meier’s Corda in Germany: a few guys in Illinois who are good electrical engineers and take a non-nonsense approach to building audiophile quality gear without audiophile prices or bullshit. That said, my ears say Meier’s gear has the advantage over JDS. Both have excellent specs but Meier’s stuff is subtly sweeter and more refined.

A few years ago I found the best headphones I’ve ever heard, the Audeze LCD-2. These are the 2014 Fazor version. A while later I made them even better with a subtle parametric EQ. That may sound like sacrilege to some audiophiles, but it works for me. The LCD-2 has  enhanced my late-night music listening and I still enjoy and use them regularly.

Since then, Audeze came out with another headphone: the LCD-X. It is designed to have a more neutral (flatter) frequency response and faster/cleaner transient response. Both of these claims are substantiated by measurements. But how do they sound? I wanted to find out. Audeze had a sale so I ordered a pair to get a listen.

I ran the comparison through my Behringer DEQ2496. More precisely, CDs played on my Oppo BDP-83, toslink to DEQ2496, toslink to Oppo HA-1, balanced headphone out. The DEQ2496 enabled me to level match within 0.5 dB, keeping the signal otherwise unchanged, or apply EQ as mentioned below. This doesn’t use the DEQ2496’s DA or AD converters; it operates in pure digital mode. Subjectively, I found the X to be 8.5 dB louder than the 2, so used this to equalize the levels.

First I did the fair comparison: head to head, no EQ. Here it was no contest: the X was easy to differentiate, and overall better sound:

However, I don’t listen to my 2s straight. I apply a parametric EQ: +3 dB @ 4600 Hz, Q=0.67 (3 dB / octave, 2 octaves wide). This counteracts the 2’s softness in the upper mids and lower treble, giving it a more neutral response curve and a bit more detail as if you’re sitting a few rows closer to the stage.

So next I did the realistic comparison: how I would actually listen to them: X raw, versus 2 with the above EQ:

Here it was a much harder decision. I also compared them to my speakers. They were about equally close to that sound, yet approaching it from opposite sides. These are both excellent headphones and I could be happy with either. They wipe the floor with any conventional dynamic headphone I have ever heard. If I didn’t already own the 2, or if I didn’t have a digital parametric EQ, I would pick the X. But I do already own the 2, and with the parametric EQ they are just as good as the X. I listen mostly to acoustic music and the 2’s realistic voicing is more important to me than the X’s extra 1% of detail. So why change anything?

I kept my LCD-2F and returned the LCD-X thanks to Audeze’s excellent service which includes a 30 day trial period. It was a fun experiment and satisfied my curiosity. While I kept my LCD-2F, I can heartily recommend the LCD-X to anyone who wants a fantastic set of headphones with dynamic and detailed yet realistic sound.

Addendum: In 2016 Audeze improved the LCD-2 drivers, making them thinner and lighter with better transient response, and improved reliability. The frequency response is unchanged. I upgraded my LCD-2 to these new drivers, now I have the best of both!

PS: a few years after I made this comparison, DIY Audio released reviews of these headphones. Their FR measurements correlate to some of my subjective observations above: namely the LCD-X has (1) low bass slight lower in level, and (2) uneven response from mids to treble.