The term “balanced” is somewhat ambiguous when it comes to audio. In audio circles it usually means differential signalling, and that’s the sense I describe here.

Below is what the same audio signal looks like when balanced (signalled differentially). The red line is the + signal, the blue line is the – signal. Here, neither wire carries ground. Each wire carries the same signal, but they have reverse polarity (inverted phase). The difference between them is a signal having twice the amplitude. At every instant in time, the voltage sum of the + and – wires is zero, so the overall cable (containing both + and – wires insulated from each other) has a net field of zero, which makes it immune to interference. 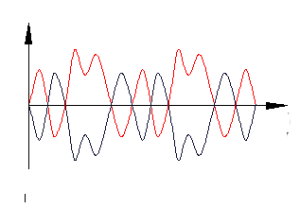 Balanced audio was designed for microphones, which have low level signals carried on long wires. In this application, noise isolation is important and you need all the S/N you can get. Consumer audio analog line levels are in the range of 1-2 Volts, about 1,000 times or 60 dB stronger than microphones. And cable runs tend to be shorter.

Thus, balanced audio doesn’t make much if any difference in consumer audio applications. It’s a superior engineering design, but it doesn’t necessarily make any audible difference especially in top notch gear that already has S/N ratios over 100 dB. It’s nice to have, but I would not pay extra, or chose one piece of equipment over another, for this feature alone. Sound quality comes first, balanced vs. single ended is a secondary concern. Some single ended amps are better than some balanced amps.