While thinking about escape velocity recently, I wondered why orbital velocity wasn’t the same as escape velocity. The intuition was: consider an object in a circular orbit around the Earth at speed v. If the object speeds up just a smidge, then its centrifugal force increases, which pulls it slightly further away from Earth, where gravity is weaker, so it goes even further away, etc. It seems like a positive feedback chain reaction, the object getting progressively further away from E. That would imply that orbital velocity equals escape velocity, because if you go even a smidge faster, you’ll eventually escape orbit.

However, I worked out the equations and escape velocity is not equal to orbital velocity, but it’s about 41% faster (actually, square root of 2 faster). Upon further thought, I realized my earlier intuition missed a key point: as the object moving slightly faster goes further from Earth, its trajectory flattens out. When its trajectory is a circle, the force of Earth’s gravity is perpendicular to its motion, so it does not affect the object’s speed. But when the object’s trajectory flattens out, it’s no longer a circle, so Earth’s gravitational pull is no longer perpendicular to its motion. Some small portion of Earth’s gravitational pull is slowing it down! Then, of course, pulls it forward speeding it up as it comes around the other side of the ellipse.

So when the object speeds up a smidge, its orbit becomes elliptical. It has to go significantly faster than that to escape from Earth. In fact, about 41% faster since the difference is the square root of 2.

This also means orbits are stable: if the velocity changes a bit the shape of the orbit changes, but it stays in orbit. If escape velocity equaled orbital velocity, orbits would be unstable: the slightest bump would send it out into space or spiraling inward.

When the math contradicts intuition, it leads to re-thinking which can deepen one’s intuitive understanding.

Escape Velocity is commonly described as the minimum speed an object must reach to escape the Earth (or other celestial body) into space. But this definition is ambiguous and can be misleading.

You can escape the Earth at walking speed, if you could walk straight up; you don’t need anywhere near escape velocity. Imagine a rocket launch; in the first few seconds just as it starts to move, it’s going up at walking speed. Theoretically, it could throttle back the engines to maintain that slight upward speed all the way into space, so long as it didn’t run out of fuel or become unstable. A space elevator could also leave Earth at mundane speeds.

The key to this ambiguity is escape velocity applies to a free body, an object that is passively moving according to the laws of physics, having no thrust of its own. In other words, if a rocket achieves escape velocity, it could at that point turn off its engines and it would still escape the Earth. Intuitively it seems the higher the altitude, the slower the escape velocity. This turns out to be correct.

Escape velocity is easy to understand and derive mathematically with some creative thinking. Imagine 2 objects in space (a big one and a much smaller one, like the Earth and a stone) surrounded by vacuum, no other objects. So there is no friction and no other bodies exerting gravitational pull. Suppose the stone is at rest relative to the Earth and almost infinitely far away. The gravitational pull is effectively zero. Imagine the stone precariously balanced just on the outer rim of Earth’s gravity well. Then you nudge the stone just a smidge toward the Earth, so it crosses that rim and the Earth starts pulling on it (and vice versa). It starts out slow, but accelerates toward the Earth incrementally faster and faster.

Note: the bold face statement above is the nut of this explanation. When you grok its fullness, you grok the fullness of escape velocity.

That’s because of conservation of energy. When the stone was at the rim of Earth’s gravity well, it had a lot of potential energy. At the point of closest approach, all that potential energy has been converted into kinetic energy. Assuming no atmosphere, no losses, the two energies are equal. So as the stone speeds past the Earth, slowing down due to the same gravitational pull that sucked it in, that kinetic energy is converted back into potential energy. So it must reach the exact same distance away when it peters out and eventually stops.

The direction of motion is irrelevant to escape velocity. Normally this seems counterintuitive, but understanding escape velocity with our theoretical example, you can easily see why direction doesn’t matter. At that point of closest approach, it doesn’t matter what direction the stone is moving relative to the Earth. It could be nearly straight up (can’t be exactly straight up, or it wouldn’t have missed), or nearly horizontal. If it’s going horizontal, it has to travel further to escape, but being horizontal, gravity isn’t pulling it as hard. These conflicting factors are equal and cancel each other. All that matters is the altitude (distance of closest approach), because the speed depends only how much energy it’s gained from Earth’s gravity field.

If, at that point of closest approach, the stone were moving any slower, then it would have less kinetic energy, and it will not go as far away. That means it won’t make it to the rim of Earth’s gravity well, so it will still be inside the well, reverse direction and eventually come back to Earth. So escape velocity is the minimum speed a free body can have, and escape the Earth.

Here is the mathematical derivation: 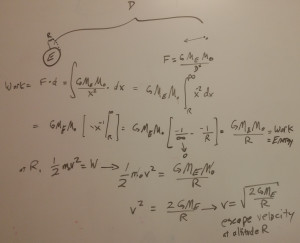 Today the NYT published an Op-Ed by David Joy. I enjoyed reading it and share some of his observations. About 3/4 of the way through he suggests an AR-15 is somehow different from other rifles in the store, saying, “the idea of owning a rifle designed for engaging human targets out to 600 meters just never interested me.” He asks a friend why he owns an AR-15 and is unsatisfied with his friend’s response. Here is mine.

First, David’s belief that the AR-15 is somehow different from other rifles in the store, is not justified by the facts.  The AR-15 is a semi-automatic .223 caliber rifle. It is less powerful than most common .30 caliber rifles, like the Savage .308 David uses to hunt deer. These more powerful semi-auto rifles are just as accurate, often have longer range and are commonly used for sport, hunting and self defense.

Second, David mis-characterizes the AR-15 when he describes it as “a rifle designed for engaging human targets out to 600 meters”. For engaging human targets out to 600 meters, look at what military snipers use. They use a rifle that is more powerful, more accurate, and has longer range than an AR-15. This rifle is the M-24, which is a .30 caliber bolt action Remington Model 700 with a 5 round capacity, the same kind of rifle your Grandpa carried through woods, still carried by thousands of hunters across the USA. Later, Army snipers switched to the M2010, which is another .30 caliber bolt action rifle with a 5 round magazine.

In short, according to the US Army, a rifle like David’s Savage .308 is more effective than an AR-15 at “engaging human targets out to 600 meters”. But that’s not a fair comparison; the Army doesn’t even use the AR-15.

People who don’t know much about guns believe, incorrectly, that the AR-15 is a military rifle. They believe this primarily for cosmetic reasons. Instead of steel and wood, it is black with lots of plastic and resembles the M-16 that US soldiers carry. Yet it is unusual to see an experienced gun owner like David make this mistake. The military M-16 is not an AR-15. The M-16 can fire in full automatic mode (a machine gun) which has been strictly regulated since 1934. The AR-15 fires one bullet each time you pull the trigger.

So when David says, “My friends see no difference between the guns I own and their ARs,” this should come as no surprise. The only material difference is magazine capacity.

To David’s final point, there are several good reasons to oppose an assault-weapons ban.

In short, an assault weapons ban has already been tried, studied, and found to be ineffective. And the reason why is obvious: true “assault weapons” — machine guns — are already banned and have been since 1934.

Note: I don’t own an AR-15 simply because I find other guns to be more useful for sport, hunting or self defense. However, having used one, I don’t believe there is anything about it that makes it more dangerous than other rifles in common use today. I don’t see the AR-15 as a sign of a rift in gun attitudes or culture. The gun owners I know are responsible citizens, whatever kind of rifles they prefer.