This is Day 1 of a 14 day trip from Seattle to Alaska and back. Click here for the prior and next entries.

The Trench route is the quickest and quite scenic, and we had been tracking weather for the past 2 weeks. Our target date was July 8. We were ready to delay the entire trip if necessary, but it wasn’t: things looked good all the way from Seattle to Whitehorse. I filed the EAPIS, international flight plan from KBFI to CYXX, and called Canadian customs the prior night. We got to the airport at 6:30am for a planned 7:15 departure. We loaded the plane, weighing each item and distributing to maintain CG within limits. With the 3 of us, all our gear, and full fuel, our total weight was about 2,460 # which is 90 below GW. CG was around 46.8″, which is toward the rear end of the range, which means slightly better cruise efficiency.

We took off at 7:15 as planned. I requested flight following and was transferred to Seattle approach. I asked if they could activate my flight plan; he replied negative. I asked if he had the local RCO frequency handy, he said negative. So I switched to 122.2 for flight service. The controller activated my flight plan and gave me a discrete squawk code. When I switched back to Seattle approach, the controller said he couldn’t service me because I changed my squawk code. Since I was on an active flight plan and had my squawk code, I didn’t need to talk to him anymore so I cancelled service. Incidentally, that Seattle approach controller was the worst service I have received in the air in nearly 1,000 hours of flying, so I can’t complain too much.

50 minutes after takeoff we were over the Whatcom HUH VOR. Abbotsford was 10 miles away so I called them up (I already had their ATIS). They gave me L base for runway 25.

Days earlier, I had called the FBO on the W side of the field, which has self-service avgas pumps. They said I could land there and Customs would come out to meet me. But the controller said to taxi to the Shell FBO on the E side of the field, because that’s where Customs usually meets people. So that’s what I did. We were spot-on-time to our estimated arrival of 8:20am.

Here are our flight tracks for this leg. Some get split due to Naviator (the app I was using) crashing during flight, and restarting.

I called customs and had a 15 minute wait before getting a person. He was just about to clear us over the phone, when I declared that we had a shotgun with us, and the accompanying Candian paperwork RCMP form 5589. He put me on hold for about 10 minutes. Normally, they have an agent meet you in person to process this, but apparently there was some kind of screw-up and despite my 2-day advance notice with this declaration, they didn’t have an agent at the airport. When the customs agent returned to the phone, he said he’d process the form over the phone by us manually reading off the fields to him. All in all, clearing customs was a 50 minute phone call.

Next, we walked to the FBO to fuel up the airplane. I could make it to Williams Lake without extra fuel, but I had not flown the route before and wanted to be extra cautious about fuel. After that, I called Nav Canada to file the flight plan from Abbotsford to Williams Lake, fetched latest ATIS, contacted ground, then tower, then took off for Williams Lake.

We headed NE toward Harrison Lake, over the Northern Rockies to the Fraser River Valley, keeping below Vancouver’s “C” shelf at 6,500′ until we got far enough NE. The clear weather allowed us to fly high and cut the corner, not having to fly E to Hope then N. It was a beautiful flight. Then we followed the river N to Williams Lake.

Williams Lake is not a towered airport, so as we approached I made US-style radio calls on their frequency. On my first call about 8 miles out, Williams Lake responded giving the airport wind and barometer setting, asking which runway I would use. This was my introduction to how Canada is a little different from the US. Their untowered class E fields usually have an active RCO with mandatory radio comms. It all went smoothly because they’re not that much different from the US. A commercial flight landed after we did, so we did our best to stay out of their way at the self-serve pumps as they were de-boarding passengers.

Next, I called Nav Canada to check weather up the trench. Prince George makes a good transition point between the trench and Al-Can routes. With good weather, we’d go to Mackenzie and up the trench to Watson Lake. Otherwise, we’d divert NE and cross the mountains to Ft. St. John, then along the Al-Can highway to Ft. Nelson. That is a longer route, but sometimes has good weather when the trench is socked in. Weather was good up the trench, so that was our plan.

This was a short leg and I ran it at high power (2600 RPM, 120 kts TAS). We flew right over the Prince George VOR, which is atop a hill just E of their towered airspace. Then N to Mackenzie, which has no nearby VORs or ADFs, so you need to find it the old-fashioned way, with the Mark VII eyeball using landmarks and paper charts. It’s about 8 miles up from the S end of the big lake, on the E side. 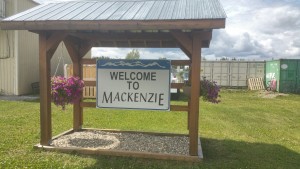 At Mackenzie we called the fuel phone number from the CFS because nobody was there. The same lady I spoke with a week earlier answered and remembered me calling. She drove out to the airport, helped us refuel, offered us (free!) ice cream cones and cookies, and local advice with very detailed charts of the trench on her wall.

I had noticed the plane was just a bit tail-low on short final during landing, so I readjusted our load, swapping a heavier backpack forward into the rear seat to bring the CG forward just a touch. And I moved the tent under the right side passenger seat, which not only brought the CG forward a touch, but also cleared a little more space in the airplane. We kept this loading for the rest of the trip.

This (Mackenzie to Watson Lake) would be the longest single leg of the trip: 346 nm. It’s well within my range, but I’d fly it a bit slower for better efficiency: around 2400 RPM which is about 10% more efficient than high speed 2600 RPM cruise.

This leg goes N up the trench. It starts with a long, narrow lake (actually, the Williston Reservoir) lying in a gorge that runs perfectly straight for about 1,000 miles. The lake runs for about 160 nm, with Tsay Keh Dene at the N end. This marks roughly the half-way point of the leg; from there, it’s about 180nm straight to Watson Lake.

We found this leg incredibly scenic, and remote, though we saw numerous private dirt runways along both shores of the lake. If the engine stopped chugging, any of them would make a good safe landing spot. We also saw several lakes with amazing shades of turquoise, looking like Caribbean reefs. 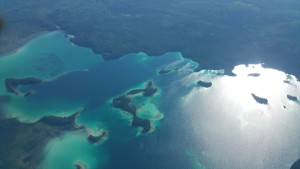 Finally, we emerged out of the mountains into the flatlands getting closer to Watson Lake. Here we encountered light turbulence and 10 kt headwinds.

Finally, we landed at Watson Lake. Flight time: H 63.5 – 66.9 = 3.4 hours. It took 26.5 gals to fill up, so we had 13.5 remaining and were burning 7.8 gph. Fueling at Watson Lake is a little different. First, go to the terminal to get “the card”. Take the card to the pump terminal and activate it, then fuel up. Then, go back to the pump terminal and print the receipt. Then, take the card & receipt to the terminal to pay for your gas.

At Watson Lake we met a fellow pilot named Paul flying a 1948 Aeronca. He was also en route to Whitehorse, but planned to camp at Watson Lake for the night. Flying a 172, one doesn’t often meet people who fly lower or slower, but the Aeronca is one of them. As we prepared to depart, Paul changed his mind and followed us west toward Whitehorse. This far north (above 60* latitude) in July, we’d have light until past midnight.

We departed into the wind to the W and followed the 261* radial of the Watson Lake VOR, which goes straight to Whitehorse. About 15 minutes after we took off, we heard Paul on the radio behind us. On this route, 8,500′ MSL is sufficient to clear terrain and fly straight, which saves you 30 minutes or more over following the twists and turns of the Al-Can highway, which you might have to do with low cloud ceilings. We had 10-15 kt headwinds but only scattered clouds and were in no rush. Perfect conditions, daylight and amazing scenery the entire way.

We flew direct to the Whitehorse VOR. Their ATIS reported winds 22 gusting 35 from 200 to 220. About 8 miles E of the VOR I called the tower. They gave me a L base to runway 19, which is only 1,800′ long. With that stiff headwind, this would be plenty! Whitehorse airport is on a big elevated plain, running N-S, west of town. As you approach from the E side to land on runway 19, with wind from the SW, one expects a down-draft as the wind follows the terrain drop-off. And that is what we got. Landing was a cinch. Came in at 60 kts on short final, pushed in some power for the down-draft, then back to idle over the numbers. We had a smooth landing using only half the runway.

Our tie-downs were too short to reach the runway hard points, which were widely spaced. And in a windy place like Whitehorse, tie-down is a must. We walked over to the fire department and they gave us some extra rope. We tied them into large loops which we used as extenders. While we were finishing all this, we saw Paul land in his Aeronca, about 1 hour after we landed. We grabbed a taxi to the Westmark Hotel, walked to the Big Bear Donair (the only place still open) for a tasty midnight dinner of falafels and draft beer, then walked back and hit the sack. Over 9 hours of incredible flying through some of the most scenic country in the world made this one of the best days of my life.