This is part 1 of an 8 part series comparing the Meier Corda Soul and Oppo HA-1.

Click here if you want to cut to the chase and read the summary.

I’ve used an Oppo HA-1 as my DAC, preamp and headphone amp for nearly 4 years. The reason I still have it is because I enjoy listening to it so much. Yet I wonder whether better sound could be had. The Oppo is primarily designed as a headphone amp; its linestage, while very good, is a secondary feature. I listen on speakers at least as much as I do on headphones, and my speakers are more transparent than most headphones. Also its volume control is a potentiometer; a high quality Alps, but still not the ultimate in transparency and perfect channel balance that a well implemented stepped attenuator can provide.

My audio system at work uses a Meier Corda Jazz amp. I bought it over 4 years ago. It has a wonderful sound: detailed, smooth and sweet without euphonics. And some nice features, like a stepped attenuator volume control, selectable L-R cross-feed and balanced ground drive. It’s hard to find anything this nice for twice the price, and the build quality is great. So when I heard that Jan Meier recently built a SOTA DAC/headphone amp/preamp called the Soul, I was intrigued. The Soul has come out with some anticipation in the headphone audiophile community. I read that Jan brought the Soul to CanJam in Europe and it was judged “best in show”. Given some of the very nice (and expensive!) gear at CanJam, that says a lot. I also found a few people online who had auditioned it, nothing but rave reviews.

Jan built 2 prototypes of this device. The prototype resembles a science project but is solid, if not elegant, and electrically equivalent to the production version (which as of Dec 19, 2018 is yet to be released). If you contact Jan, you can arrange with him to borrow it for a listening session. When I did so, he told me he was running a pre-order to gauge interest in this device and estimate production volume (which influences the price). People who pre-order pay a deposit up front and get a lower price when the production version of the Soul is released. It turns out I contacted him just as this pre-order was ending. Jan has a generous policy of not charging to borrow the Soul prototype (though shipping it back to him cost about $65), and a 14-day return policy for the final product.

It may seem unfair to compare the Oppo with the Soul, as the latter will probably cost several times as much. But I’ve always believed, based on comparison with other headphone amps and DACs, that the Oppo punches well above its weight class when it comes to performance per dollar. Also, my goal was not a head-to-head comparison of these 2 preamps, but rather to find out whether the Soul would be a relative improvement. That is only a subtle distinction, but an important one.

Two weeks later, just before Christmas, the Soul arrived at my door having crossed an ocean, a continent, and customs inspectors. I carefully unpacked it, connected it to my system, centered/zeroed all the knobs and made a quick function test. Music! Success! I swallowed my anticipation and left both it and my Oppo HA-1 powered on overnight for listening sessions the next day. 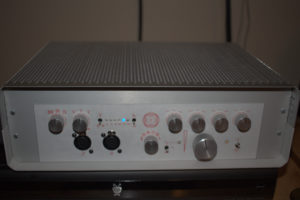 Next: system summary and setup

Note: I joined the Soul pre-order just as it was ending. Owning Meier’s Jazz amp for the past few years told me he builds high quality products that last, and stands behind them with excellent support. If the Soul doesn’t work out for me and I decide to keep the Oppo HA-1, I can forfeit my deposit knowing it supports Jan’s efforts, or I can re-sell the Soul without loss, considering its retail price will be $1000 more than the preorder price. Either way seemed worth the risk if the Soul lives up to its promise.